“Stick with it, keep talking like they don’t have a disability. They don’t know that they are different till later. As parents, you need to encourage them and go at your child’s own pace.” 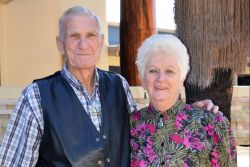 Peter and Jenny’s journey with our centre begins with their son James, who was enrolled in our early intervention program for children with hearing loss almost 50 years ago.

Peter and Jenny first discovered their son’s hearing loss after a bowl was dropped in the kitchen. Jenny screamed as the bowl shattered upon hitting the kitchen floor tiles, but their 11-month-old son James had no reaction.

From here, the family took James for a hearing test where it was soon confirmed that their son did indeed have a hearing loss.

Initially heartbroken and thinking they would have to move their family interstate, Peter and Jenny were approached by a staff member who let them know of a place right here in WA that could help teach them to make use of the limited hearing James had instead.

So began Peter and Jenny’s long and selfless contribution to Telethon Speech & Hearing. Working hard at whatever was suggested to benefit their son’s future, the couple contributed in many ways towards the centre, including fundraising. 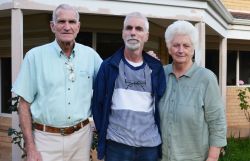 Where are they now: Peter and Jenny in 2017 with their son James.

Before retirement, Peter was a printer with The Sunday Times and was able to make an arrangement to launder the cloths used to cover the printers at the end of the day in exchange for a small fee. You can imagine the state of those cloths after a full day of printing newspapers(!) yet each week, they were taken home by Peter and laundered in the family washer, then to be returned for re-use a day or so later.

All money received for washing the cloths were then donated back to the centre. The Stewart family also helped to raise money through selling vegetables at local food markets, and Jenny eventually came to work at the centre as a Secretary.

Upon reflection, Peter and Jenny say their favourite part of attending Telethon Speech & Hearing was being around people and families who were dedicated to the cause. No matter what social or economic background families were from, there was a real sense of togetherness. The centre also employed teachers from around the world, which allowed children to differentiate accents through cued speech and set the tone for an inclusive, multicultural learning environment.

Peter and Jenny’s advice to parents of children with hearing loss is to think big: “Stick with it, keep talking like they don’t have a disability. They don’t know that they are different till later. As parents, you need to encourage and go at your child’s own pace.”

“You will need to listen to them with care and attention. Deafness cuts you off from people. Introduce your children to the speaking world and they will benefit greatly from it.” 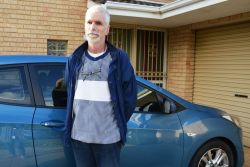 Former TSH student James, says that driving his car gives him a sense of freedom and independence.

About Peter, Jenny and James Stewart

Peter and Jenny were former parents of our centre. Their son James attended our early intervention program for children with hearing loss back in 1968. Click here to learn more about Our History.