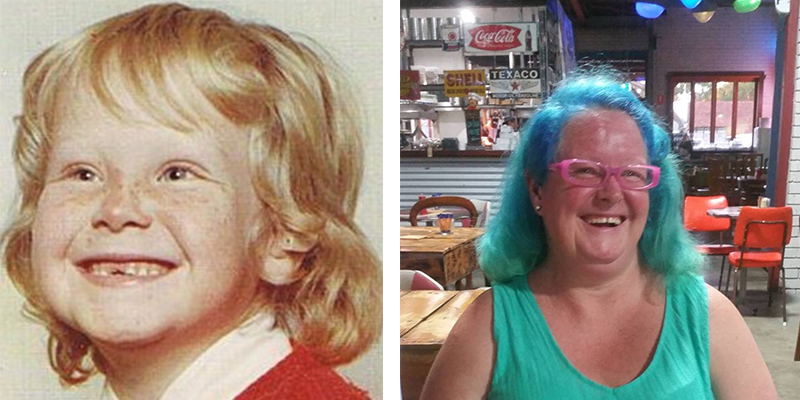 Sandra Yaxley then and now.

Today’s highlighted story is from Sandra Yaxley OAM, a former Australian Paralympic swimmer who lives with cerebral palsy and a hearing loss.

Within the first week of arriving in Perth, I had an assessment at Sir James Mitchell Centre and Princess Margaret Hospital, where they diagnosed me as deaf with high-tone hearing loss.

At the time, my deafness was the dominant disability so my education came under The School of Deaf and I went to Sir James as an outpatient. As a young child, I attended Telethon Speech & Hearing (which back, then was known as The Speech & Hearing Centre) where I was taught to listen and lip-read from age 3 to 6.

I loved the school uniform, in winter it was a charcoal grey skirt with a white blouse and red tie, over that a red cardigan, very smart. In summer, it was a dress made of this grey, red and white tartan material, with a little red tie and red buttons. This was smart too but not as smart as the winter one  – as you can tell I was very fashion conscience at a very young age!

When story-time came, my teacher used to change the wording for my benefit, for example, ‘big’ became ‘huge’ and ‘tall’ became ‘high’.

I was always picked up by one of two families, who also had children attending the centre. One parent was Mrs ‘Wormington’ (who was really Mrs Worthington), I feel really embarrassed now, but it was how I heard the name. So I’m really sorry about that.

After being with the program for several years, it was decided that as I was too good to stay with the deaf education system, and that I was ready to go out into mainstream education.

Since then, I’ve represented Australia, five times swimming, for Cerebral Palsy, two Paralympics (1988 Seoul one Gold W/R, one Silver and 1992 Barcelona one Gold, one Bronze,) and three world games, became a swimming coach, a small business owner and now an artist. Received the Queens Honors 1993 for service to sports.

Sandra is a former Australian Paralympic swimmer. She has cerebral palsy which has caused a hearing impairment.

Originally from Tasmania, Sandra moved to Perth in 1972.