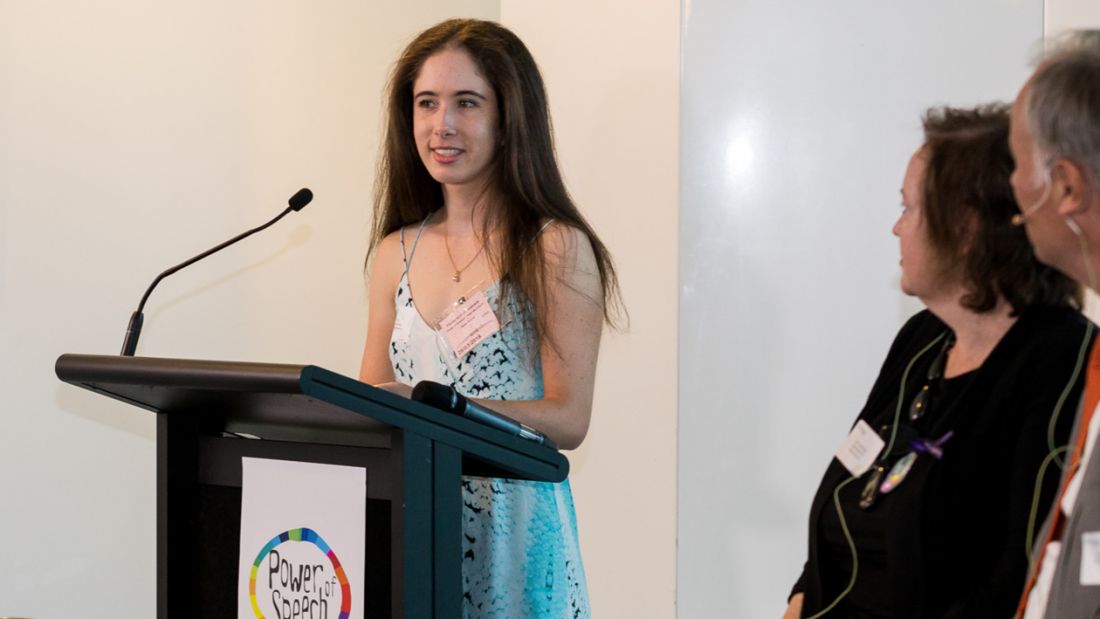 On March 26, six incredible young individuals from across Australia and New Zealand lent their voices to highlight the critical importance of continued and improved support for people with hearing loss at Power of Speech – Hear the Future.

Among them was TSH graduate, Gaby Gray.

Gaby presented a short speech to key policy makers and politicians on the issues faced by Australians like herself, living with hearing loss and the need for the government to make hearing health a priority.

Gaby was just 18 months old when her parents first realised something was wrong with their young daughter’s development as she did not talk, but mumbled consistently instead.

“As I had been to many appointments with paediatricians and other medical professionals without any of the suspecting hearing loss, no one thought I was hearing impaired,” Gaby said.

“Particularly when they found out I had glue ear (a build-up of sticky glue-like fluid inside the middle ear cavity instead of air), as it was assumed this was the cause of me not being able to hear.”

“Mum was determined that it wasn’t just glue ear so we were told to get a hearing test to put her mind at ease. That’s when it was discovered I was profoundly deaf.”

Now in university, Gaby is a graduate of our School Support (Outpost) Program at Newman College, where she attended school from pre-primary to year 6. Gaby also had regular audiology appointments at the TSH clinic.

“I think it has made a world of difference,” Gaby said of her time with TSH.

“I would definitely not have been able to have achieved the things I have and be where I am today without the help of the program and the incredible people at Telethon Speech & Hearing who have guided me along the way.”

“The programs, particularly Outpost, allowed me to learn the skills to speak and communicate confidently while staying in the normal school environment.”

Held at Parliament House, Canberra, Power of Speech – Hear the Future focuses on fostering positive discussions on issues facing Australians with hearing loss from the past, today and in the future highlighting the need for the government to make hearing health a priority. The event comes at a critical time for the hearing loss sector which is facing ongoing challenges due to the rollout of the National Disability Insurance Scheme (NDIS).

The six participants are graduates from each of the six First Voice centres – The Shepherd Centre, Telethon Speech & Hearing, Hear and Say, Cora Barclay – now Can:Do4Kids, The Hearing House and Taralye.